Matthew Paige Damon (better known as Matt Damon) celebrated his half-century(50th birthday) on the 8th of October. In 1997, the award-winning American actor Matt Damon rose to fame after writing and starring in Good Will Hunting with his friend Ben Affleck. After the success of the movie and winning an Oscar for original screenplay for the project, he hasn’t looked back. Some of his finest works include The Martian, Ocean’s Eleven series, and Jason Bourne thrillers.

Throughout his career, Matt has given some of the best on-screen performances in serious, dramatic, and thriller movies and each character has left his fans only expecting the best in his next silver-screen venture.

Now, let’s take a look back at some of his best performances. Released in 1997, Matt Damon’s most notable performance has come alongside his real-life best friend (Ben Affleck) in this Oscar-winning movie. Playing the central role, Matt plays Will Hunting, a struggling, hand-to-mouth man who works as a janitor at an ivy-league college in Boston. The movie displays the true reflection of a working-class individual with little to no ambition in achieving anything in life till the time he is bailed out of trouble by a professor teaching at the same university.

What Will Hunting never realized was his supernatural talent in solving some of the most complex math equations. As a gifted individual, the professor nurtures this talent and enrolls Will through a psychological therapy that, in turn, changes his personality to a degree of intense maturity and integrity.

This movie brought Matt Damon amongst A-list celebrities in Hollywood and rocketed his career to new heights. His most recent achievement came in the 2019 biopic of two of the largest racing car manufacturers of all time. Set in the 1960s, when Ferrari was dominating the racing world, Henry Ford II wanted to construct a revolutionary racecar that will leave Ferrari drivers choking on fumes. So Carroll Shelby (played by Matt Damon), an automotive designer, and Ken Miles (played by Christian Bale) notorious British race-driver, joined hands to make this dream come true for Ford Motors Co.

It’s fun to watch the two stars slowly bonding over their love for cars and their obsession with making a $9 million car move at rocket-speed without exploding. In 1966, the duo reaches their climactic moment, when they race against the cars of Enzo Ferrari at the 24 Hours of Le Mans. If you’re a motor-head, it is a must-watch for you. The incredible car sequences will leave you awestruck! The thrilling story and extraordinary performances of the leads will keep you engaged. Starring in four out of the five Bourne movies (2002, 2004, 2007 & 2016), The Bourne Series displays Matt Damon’s most engulfing performance in an Action-Drama sequence in the world of spies. Playing the lead role (Jason Bourne), it is claimed that Matt had studied various spy roles before taking this challenge along with Robert Ludlum’s novels from where the storyline is adapted from. The movie primarily revolves around the life of a CIA-controlled assassin (aka ‘asset’) who loses his memory. Jason then begins his journey to discover his identity; however, he ultimately turns against his handlers at the CIA as he sets himself on a mission to uncover the truth in an otherwise secret world.

In 2002, these action-packed series started with “The Bourne Identity,” showing an anonymous man (Bourne) with gunshot wounds on his back. Rescued by a fishing vessel in the Mediterranean Sea, Bourne had forgotten about his past and is shown to be unable to recollect who he is. While each movie has a conclusion, there are still details that lead the viewer’s expecting a sequence to follow.

These American action thriller film series continue to show the struggles of Bourne suffering from dissociative amnesia, trying to figure out who he is. Damon’s brilliant performance is seen in the series The Bourne Supremacy (2004), The Bourne Ultimatum (2007), and Jason Bourne (2016).

You can’t miss watching this film series if you have a special place for action movies in your heart. This one has surely turned Matt Damon into an A-grade superstar. Directed by Ridley Scott, the movie shows an astronaut Mark Watney (Damon), stranded on Mars. During a mission to the planet, he is left behind by his team, assuming he died in a storm. But, Watney is still alive and must utilize his wits and spirits to survive on the hostile planet. While he finds a way to contact earth to rescue him, the NASA team and international scientists work together to devise a plan to bring him back home. The movie displays Matt in another light since the role required him to show immense focus as the only human on an alien planet. Being a true Matt Damon fan, this sci-fi drama should be on your “movies-to-watch list”! Taking you into the future, the movie depicts polarized worlds in the year 2154. The movie shows two classes of people – the wealthyones living in a luxurious world called Elysium, while the lower-class living on ruined, overpopulated earth. The all-powerful Secretary Delacourt (played by Jodie Foster) makes sure to stop the people of earth from entering into Elysium and maintain the luxurious lifestyle of its citizens. However, Max (played by Matt) tries by all his means to bring equality by taking on a life-threatening mission.

The dark science fiction thriller is considered relevant to today’s society with the prevalence of social and economic inequality. The rich are getting richer, and the poor are getting poorer. If you’re fond of movie storylines focusing on equality for all mankind, devoid of class differences, then this could be your weekend watch. This movie is about the romantic relationship between a young bi-sexual boy raised in foster homes, Scott Thorson (played by Matt), and a flamboyant entertainment giant, Liberace (played by the seasoned Michael Douglas). After six years of long affair, Scott begins to feel suffocated and eventually rebels. He is then tossed onto the streets when Liberace finds a new lover.

Although Scott seeks legal redress, the bond between the two lovers doesn’t completely tear. This movie is seen as a daring challenge by both lead actors, given their otherwise action-packed heroic appeal. It’s never easy to see an action-hero playing an otherwise sensitive role. However, this drastic change proved Matt’s ability to be seen as a versatile actor who isn’t scared to take on risk in Hollywood. Released in 2011, this movie seems to be aptly poised in today’s Pandemic environment. The movie deals with the outbreak of a virus, when Beth Emhoff (played by Gwyneth Paltrow) dies after returning from a business trip from Hong Kong. The same day, her son also dies, leaving the husband Mitch (played by Matt Damon) in a shock, while doctors try to figure out the reason for his family’s death.

As many others began to exhibit similar symptoms, doctors and scientists work tirelessly to identify the type of virus that’s causing these deaths and develop a vaccine to combat it. With the spread of the virus resulting in breaking down societal down, people begin to panic. Something that viewers can very well relate to. 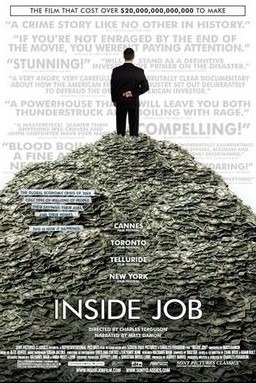 Narrated by Matt Damon, this absorbing documentary provides a comprehensive analysis of the 2008 financial crisis. Where millions of people lost their jobs, the documentary argues, based on extensive research, that the crisis was avoidable. It includes interviews from academics, politicians, journalists, and key financial insiders to understand the main elements that led to the collapse, plunging the US into a deep economic recession. Also, we believe the movie might be a little disheartening for some people, so beware. In the late 1950s, when Tom Ripley (Matt Damon), wearing a Princeton jacket, goes to a garden party to play piano, a wealthy father of a recent Princeton graduate befriends him. Upon finding out Tom knows his son Dickie Greenleaf, he offers Tom $1,000 to get his son back from Italy. As Tom meets Dickie he becomes friends with him and his fiancée Marge. Tom, with his talent of lying and forgery, goes to extreme lengths to make their lifestyles his own. The suspense thriller with Matt Damon’s outstanding performance is worth watching.